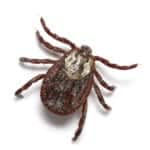 Ticks are small arachnids, part of the order Parasitiformes. Along with mites, they constitute the subclass Acari. Ticks are ectoparasites (external parasites), living by feeding on the blood of mammals, birds, and sometimes reptiles and amphibians. Ticks had evolved by the Cretaceous period, the most common form of fossilisation being immersed in amber. Ticks are widely distributed around the world, especially in warm, humid climates.

Some Quick Facts about Ticks

Although commonly referred to as insects, ticks are actually related to spiders and are technically arachnids. They are classified as parasites since they feed on the blood of host animals - which is how they get the various diseases that they can then transmit to other animals and humans. 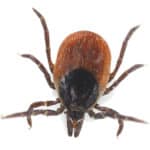 While there are hundreds of species of ticks, only a handful typically transmits disease to humans. The ticks of greatest concern in the US are the blacklegged tick (also known as the "deer" or "bear" tick), the lone star tick, and the dog tick. While there are a few other species that are found in the United States, they are not nearly as prevalent, and are typically only located in small geographic areas.

There are two families of ticks: hard ticks (ixodidae) and soft ticks (agasidae). Hard ticks have three distinct life stages: larva, nymph and adult, while soft ticks may go through a number of nymph stages before reaching adult status. The hard ticks are the ones we're most concerned with here in the US, as they're the most common, and the largest source of tickborne illnesses.

Tick larvae are not believed to carry pathogens, as pathogens are instead received from a host when the larvae takes their first blood meal going into the nymph stage. Ticks in the nymph stages are believed to be responsible for most cases of tickborne illnesses in humans, as nymphs are extremely small and can easily go undetected on the skin.

Tick bites often go undetected as they do not hurt or itch until after the tick has either been removed, or the bite site gets infected. This is why it's so very important to do thorough tick checks after playing or spending time outdoors in tick habitat. Remember that ticks love to crawl to places that are dark, hairy, and moist - so armpits, the scalp (especially behind the ears), groin, etc.

Ticks do not (and cannot) jump or fly. Typically, they transfer to hosts (usually small mammals) by waiting with arms stretched out on tall grasses or leaf litter, then crawling aboard as the animal walks by. In nearly all cases, ticks don't tend to climb more than a few feet up off the ground (meaning that they don't climb trees and hang out on leaves, fall from trees, jump, etc.).

While folks tend to be most concerned about deer being the most common sign that ticks are around, the bigger concern are actually white-footed mice, who tend to be the main vector (host) of Lyme disease!